Madhya Pradesh is the second largest state in the country in terms of area with a total geographical area of 308 lakh hectares, constituting 9 percent of the total geographic area of the country. It ranks sixth with a total population of 72 million, out of which 72% resides in rural area. The state is known for its abundant natural resources including forest, minerals, rivers and valleys. There are 11 agro-climatic zones, five crop zones and varying land use, soil types, rainfall and water resources, distributed across 51 districts in the state. Also, a significant proportion of tribals and dalits reside in the state together comprising 35% of the total state population. 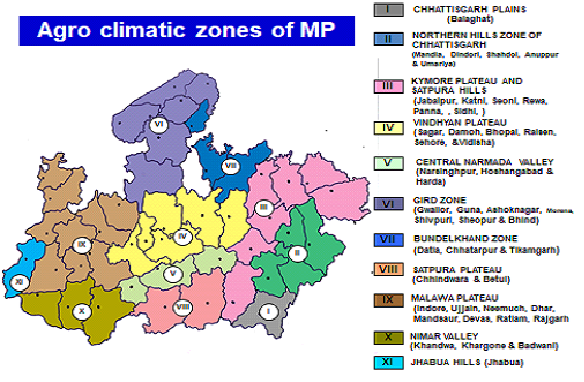 The state economy of Madhya Pradesh is predominantly rural and agrarian in nature. Agriculture sector is the mainstay of the state’s economy and is the only sector providing employment and livelihood options to majority of the rural population in the state. According to Census 2011, 69.8% of the total workers and 85.6% of the total workers in rural areas are largely dependent on agriculture for livelihood in Madhya Pradesh. This comprises 31.2% cultivators and 38.6% agriculture labours. The sector is also contributing 24.9% to State’s GDP at constant prices (2004-05 prices) and 33.6% at current prices. Hence, the positive and consistent growth rate of this sector is of immense importance to drive the state economy, especially the rural economy. It also it has a great potential in influencing the state as well as the national economy in environmentally sustaining ways.
There are numerous empirical evidence showcasing the correlation of positive agriculture growth and socio-economic development status of the citizens by way of making a dent on poverty, ensuring food and nutritional security, raising income levels and employment opportunities etc. It is also true that a thriving rural livelihood will lead to more refined urban life by reducing the migration from rural areas and putting less pressure on urban infrastructure and services.

JNKVV has 1207.48 ha of cultivated land available for research and seed production activities . Out of this, around 828.08 ha of land is being put under the seed production, mainly at the following research stations: (i) ZARS, Jabalpur (ii) ZARS, Rewa (iii) ZARS, Powarkheda (iv) ZARS, Tikamgarh etc. These centers are adequately equipped for seed production. There is need to accelerate the pace of farm mechanization, improve seed processing, irrigation and storage facilities at other production centers. Production and management of quality seed is one of the major activity of JNKVV. In all, 30 farms are in operation covering six agro-climatic zones . 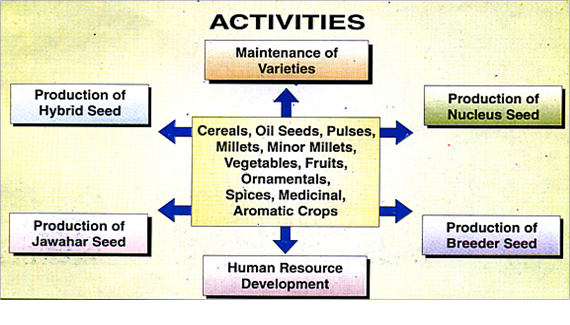 The execution of system envisages planning, production, monitoring, processing, marketing and supply of seeds to the indenters from a single window. It is being operated through Directorate of Farms of the University. The system has been effective for the successful implementation of seed production programme. The Nodal Centers for the programme is under operation at Jabalpur with three satellite centres viz., Rewa, Tikamgarh and Powarkhed located at Zonal Agriculture Research Stations.

Financial assistance has been made available from ICAR under National Seed Project since the year 1983. The project has also been strengthened in terms of infrastructure and man power in the year 1993. The project has developed the large operational system which utilizes the internal scientific/technical resources of the University to produce high quality breeder seed. The system is strongly supported by maintenance breeding programme. The main sources of funding are:

The University has been selected as one of the major participating institutions in the breeder seed production programme of GoI.

Seed production programmes of all the crops are being planned based on indents of national and state seed corporation through ICAR, private seed sector, seed market intelligence reports and based on previous year sales and demands. The total indent of all the sectors put together is being planned on the basis of suitability of the selected varieties to different agro-climatic zones of MP. The entire production programme is being developed with the consent of officer-in-charge of farms and controlling officer at zonal level every year. The change in programme is permissible subject to the approval of Directorate of Farms. The programme includes :

Jawahar Seed is being produced from Breeder Seed in the area after the coverage of nucleus/breeder seed by employing standerd quality mechanism in the seed multiplication chain.

The surplus breeder/Jawahar seed of improved varieties of various crops is being made available to the farmers to create seed demands. 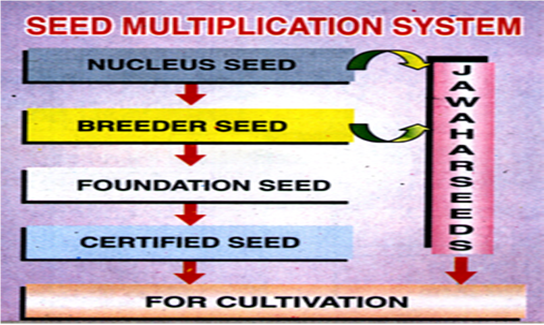 The maintenance breeding is one of the important activities of seed production programme of the University. The programme involves a dedicated team of crop scientists located at various research stations to maintain the varieties. Crop varieties are being maintained by Single Plant Selection (SPS) grown in progeny rows. The SPS bulk seed is multiplied to produce breeder seed depending up on the indents.

JNKVV has implemented the benefit sharing of the public sector breeds with the private sector. There seems to be a tremendous potential to develop the seed links programme of public/private sector. This helps in developing/strengthening research resources and adequate resource income to University. An MOU has been developed for the purpose. This MOU is as per the guidelines of IPR Management for Agriculture Research Technologies of NARS and approved by Board of Management of University. Seed companies showed interest for commercialization of early maturing Rice hybrids on non exclusive basis. Similarly in medicinal and aromatic plants partnerships are being developed through three-party agreement i.e., JNKVV, farmers and industry on mutually agreeable terms and conditions. A Business Planning Development Unit of the University has been established to care of transferable technologies for commercialization of Seed Production, Medicinal & Aromatics, Biofertilizer technologies etc


The accomplishments that made JNKVV, Jabalpur as best Breeder Seed Production Centre in the Country

Taking all this into account, the State Government has been very keen and proactive in taking several decisions and measures to make agriculture both remunerative and sustainable. A mix of appropriate policy decisions, innovative strategies and concrete programmatic interventions in this direction has paved the way for better performance of the sector in the past few years and yielded good results in terms of achievements. Some of the key achievements in agriculture and allied sector for the state of Madhya Pradesh are highlighted as given below.